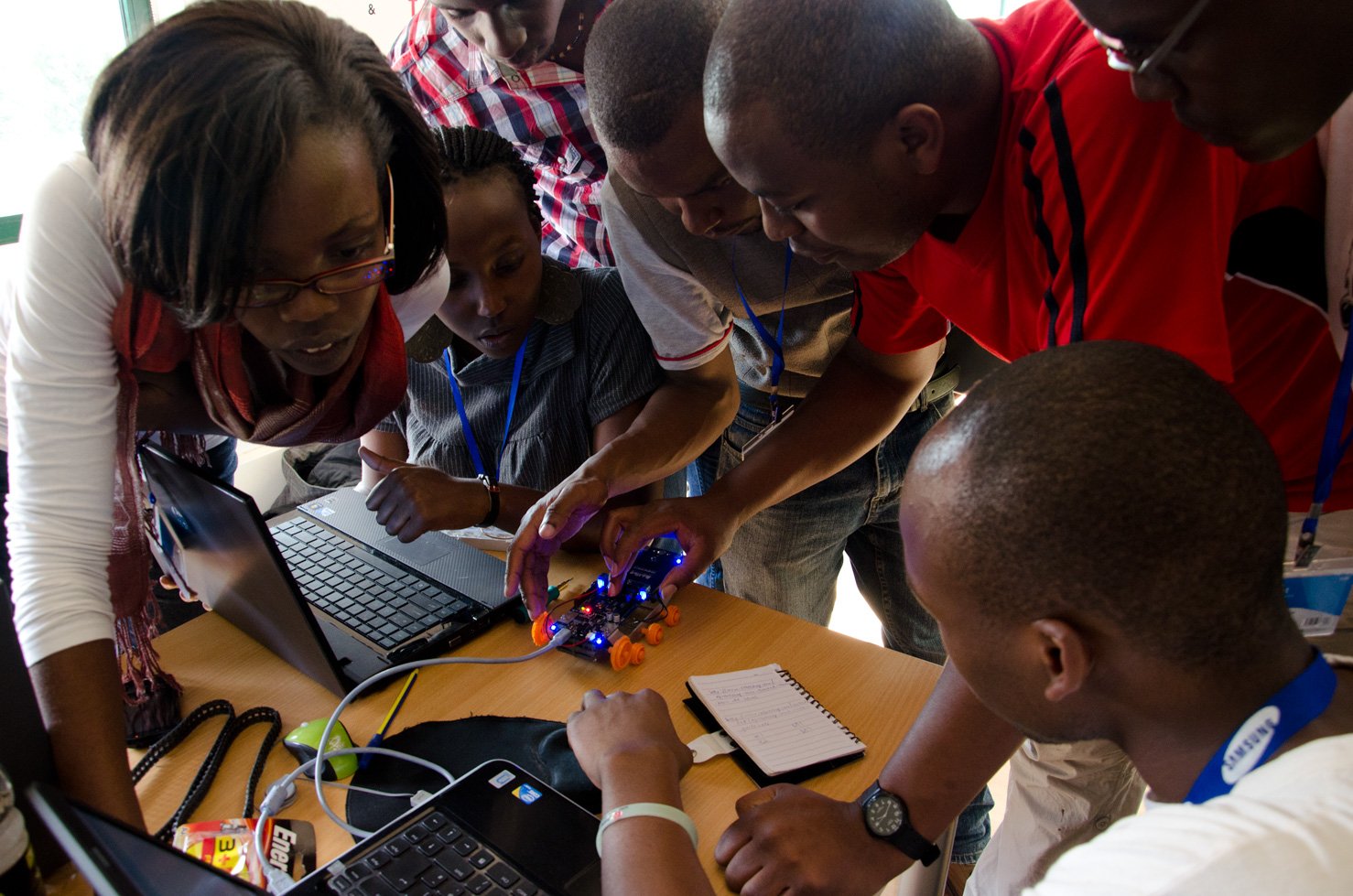 Africa's technology ecosystems have experienced incredible growth in recent years and the continent is fast becoming an exciting place for new and pioneering tech hubs. Discover how China and the US have played a part in this growth and which African regions you should be paying attention to.

When measured by monetary values, Africa’s tech ecosystem pales in comparison to Shenzen or Silicon Valley standards. However when you look at volumes and year over year expansion in VC, startup formation, and tech hubs, it’s one of the fastest-growing tech markets in the world. The continent also saw the largest global increase in internet users in 2017, with a growth of 20%.

In total, there are over 600 active tech hubs — 643 as of the end of 2019 — in Africa, proving that it is truly an exciting destination for tech tourism. What's more, the number is always rising, and fairly rapidly at that. With proper local and overseas investment, the figures can increase even further and Africa's technology sector can thrive to its full potential.

Using information provided by a 2019 report by Briter Bridges and AfriLabs, we have created an interactive infographic that will allow you to explore the vibrant tech landscape in Africa and discover the countries with the highest to lowest number of tech hubs.

Nine regions of interest have been highlighted in green from the list of Africa's 54 countries, to call attention to the intriguing tech developments in these areas. Can you guess which ones they are?

Take a look at the map to find out and to examine how innovation is developing across the continent: 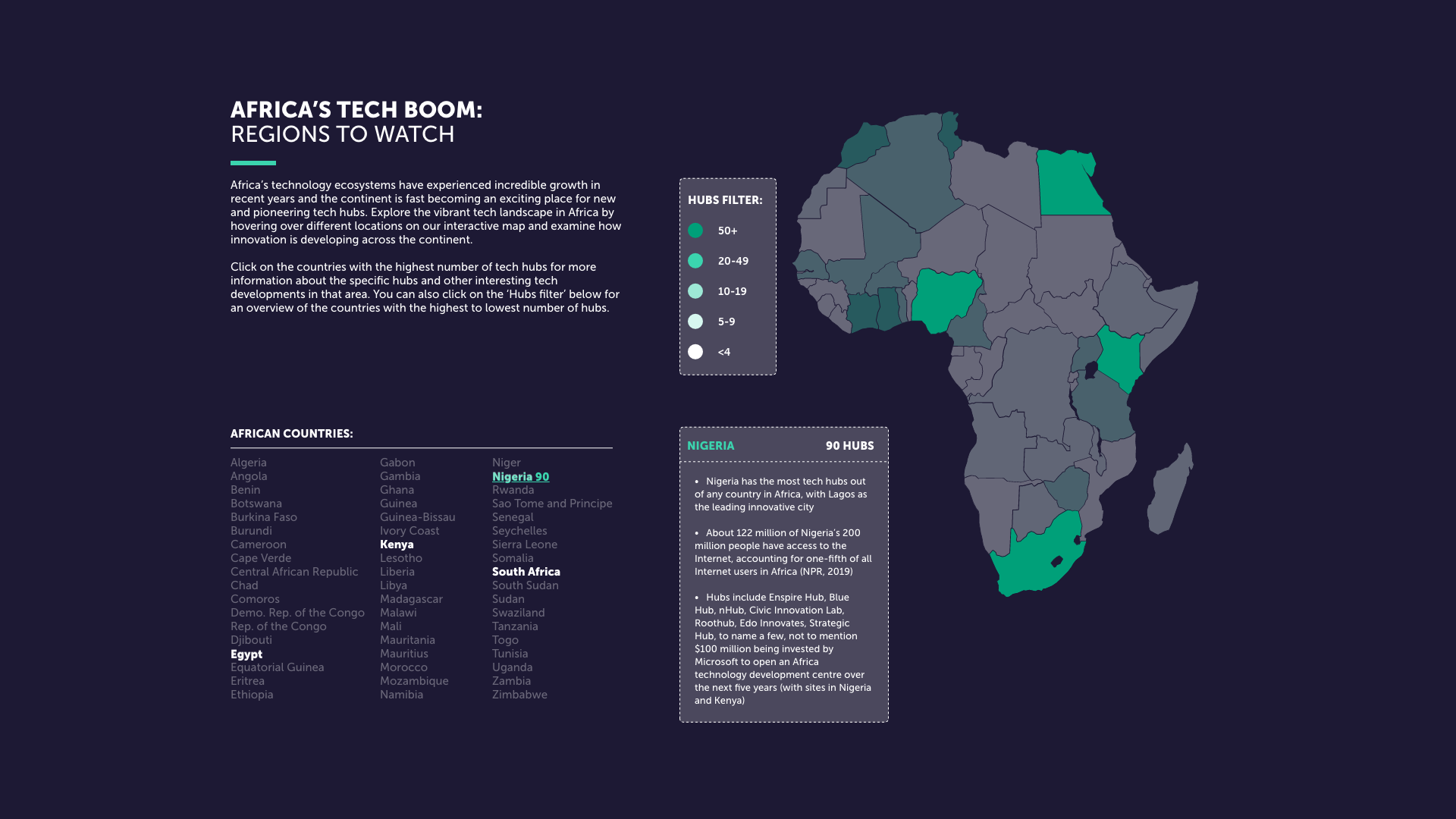 China and the US are fighting to lead Africa's tech revolution

The continent's profitability in the tech sector and youthful demographic has certainly not gone unnoticed by China and America. In November of last year Chinese multi-billionaire Jack Ma swept through Africa on a tour of its booming tech hubs, culminating in an 'Africa Netpreneur Award' ceremony and the announcement of a $10 million African Young Entrepreneurs Fund. Twitter's Co-founder and CEO, Jack Dorsey, did a similar tour of Africa's entrepreneurial hubs in the same month.

Africa has frequently been turning to China — Beijing in particular — in the last decade to help build its digital infrastructure. There is even a China Africa Tech Initiative, dedicated to leveraging grassroots knowledge of the Chinese and African tech communities for the greatest impact on the collaborative ecosystem. Major companies such as Huawei, Tecno, ZTE, Tencent and Alibaba are making investments in countries from Nigeria to Kenya.

The US, a fellow tech giant, has been battling against China in the race to lead Africa's 'technology renaissance'. For more than two decades in fact, western companies from IBM to Microsoft have been making multimillion-dollar investments into Africa’s digital infrastructure. As two of the world's largest e-commerce companies, one of the biggest battles for tech dominance will take place between Amazon and Alibaba in the coming years.

Google is heavily invested in the African continent; through its Project Link initiative, they are building links between undersea cables, ISPs and mobile networks. Its first metro fibre network rolled out in the Ugandan city of Kampala in 2015 and has expanded into Ghana, where it plans to build more than 1,000 km of fibre in Accra, Tema and Kumasi. In April 2019, Google opened their first African AI lab, in Accra.

Facebook also has big plans for the continent. In 2014 they announced their popularity amongst Africans, stating that 100 million people across Africa visit Facebook every month. Their Free Basics app (aka Internet.org) is giving African users free access to a limited number of websites, such as WhatsApp and Facebook itself, without charging data fees. Out of the 63 countries the app is available in, 27 are in Africa.

Facebook will be a headline sponsor at Women in Tech Africa this March 2020 — don't miss out on your chance to hear more about the role they'll play in the continent's tech boom.

Only time will tell as to how Africa's burgeoning tech scene will develop and which international companies and countries will gain the strongest foothold. However one thing's for certain, it's not something to be ignored!

Are you interested in discovering more about Africa's tech landscape and the innovations across the continent?

Women in Tech Africa will be taking place on March 18-19, 2020 at the CCCC in Cape Town. Don't miss your chance to gain invaluable industry insights and to explore tech developments in the continent that "will define the future". View the brochure or agenda for more information, and book your pass now to be a part of shaping the future of the African tech industry!